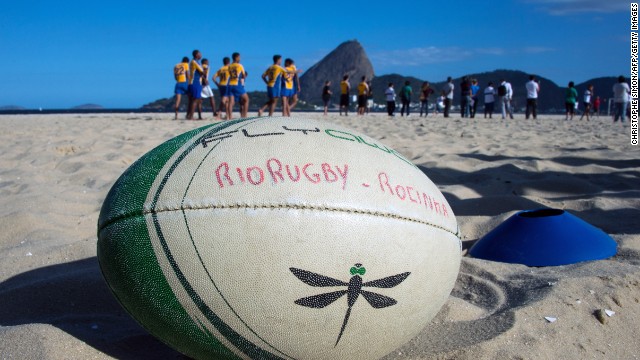 Inclusion in the Games program has set the sport alight, igniting this year’s HSBC Sevens World Series –- a nine-leg tournament played across eight months on five continents that I’m covering for CNN.

“It’s been huge for the players,” Mark Egan, the head of performance for rugby’s global governing body the International Rugby Board (IRB), told CNN. “It’s provided incentive and created more competition on the field between the teams.”

The prospect of taking to the field in an Olympic Games has seen the IRB’s ranks swell. The organization currently boasts 119 member nations, a number that is growing all the time.

Unions are even having to rethink their sevens squads with star players of the 15-a-side game - the likes of Quade Cooper and Sonny Bill Williams - expressing a strong interest in switching formats ahead of 2016.

While inclusion in the Olympics has helped to boost the sport’s profile, sevens has long been on the rise.

A slimmed down version of the more established 15-a-side game, sevens’ rapid growth has been due in part to its format.

Comprising two seven-minute halves of fast-paced, intense and technically demanding on-field action, it’s a broken-down version of the game, which has enormous global reach and loyal fan base.

Nowhere is this more evident than at the Hong Kong Sevens.

One of the oldest sevens events in the calendar, Hong Kong is regarded by many as the spiritual home of the game.

Over the years a wide variety of nations have turned out to compete, from the established rugby powerhouses of New Zealand, Australia, England and Fiji to previously unknown “minnows” like South Korea, West Samoa, Papa New Guinea and Sri Lanka.

But what makes the Hong Kong event so memorable is its unique atmosphere.

“For me, over my entire career of playing rugby it has been the most exciting tournament in the world,” says Fijian sevens legend Waisale Serevi, who has played at the event a total of 19 times.

“Once you’ve played it you want to take part every year.

“Inside the stadium, it’s electric. As a player you can’t hear your teammates who are standing five meters away from you because of the roar of the crowd.”

Decked out from head-to-toe in the fancy dress costumes that have become a trademark of the sevens, crowds pass through the streets of Kowloon and Happy Valley - a dazzling array of grown men and women dressed as Smurfs, sumo wrestlers and Little Bo-peeps.

Many have spent months perfecting their attire in a bid to outdo their fellow revellers come game day.

If sevens continues to grow on this trajectory, we might even see more numbers from the host nation follow in the tradition of William Webb Ellis and pick up a ball and run with it, rather than kick it, by the time the Olympics comes back around.