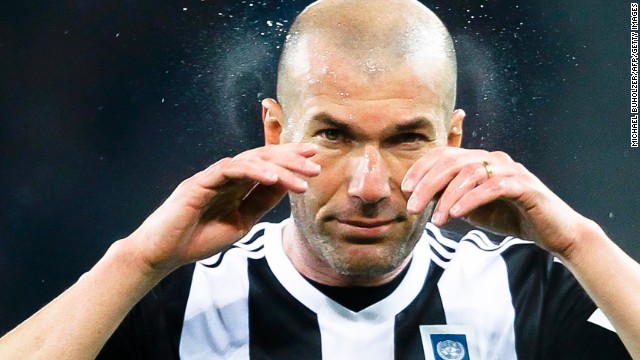 The match stems from the UN adopting the Millennium Development Goals in 2000, which were put in place to help the organization halve the number of people in the world living below the poverty line by 2015.

The Match Against Poverty has played its part in that. The 2013 event raised $360,000 for youth-oriented projects in Brazil and Cape Verde, while Lantz suggests it has raised $4 million since its inception.

This year the game took place in Bern, Switzerland, with the Stade de Suisse the venue for a match between Ronaldo, Zidane and friends and local club Young Boys.

Stars like Luis Figo, Pavel Nedved and Marta –the world's most famous female player and a UN Goodwill Ambassador - turned out for a match which finished 8-6 to the stars.

Organizers expect to raise $250,000 - generated from the sale of tickets and broadcasting rights and corporate sponsors - from the game, with two thirds of the money generated going to victims of Typhoon Haiyan.

The typhoon - considered by some to be among the strongest such storms to make landfall - struck the Philippines on November 8. Its powerful winds and enormous storm surge smashed buildings, destroyed roads and caused widespread power and water outages.

Proceeds from the match will go to the UNDP's short-term work scheme, which is focused on cleaning up after the storm and helping to put some money into people's pockets.

However is assembling a collection of retired pros to play together the best way to raise interest in ending poverty?

Lantz is convinced involving people of such a high profile is the only way to get the public excited about tackling inequality in the face of "poverty fatigue."

"Having celebrities of this calibre standing up and saying 'We should join forces to reduce poverty, combat poverty and end poverty, it's really important," she said.

"If you're a young kid in Lagos in Nigeria and you're playing football and you see one of your heroes standing up and saying 'it's about time the world ends poverty,' that's something that is very important."

The match also sees the UNDP work alongside FIFA and UEFA, two bodies which govern world and European football respectively.

According to Lantz, establishing partnerships between such large and influential organizations is vital.

"We need partners, in the private sector and in civil society," she added.

"But working with bodies such as UEFA and FIFA, and the International Olympic Committee as well, it's a way of reaching others and engaging."

A FIFA World Player of the Year winner and a two-time World Cup winner with Brazil, Ronaldo insited football can help address the issue of poverty.

"We are very proud to help people and also we are happy because all of our friends said yes and they will come," Ronaldo told CNN.

"Football has a lot of power in the world and our society."