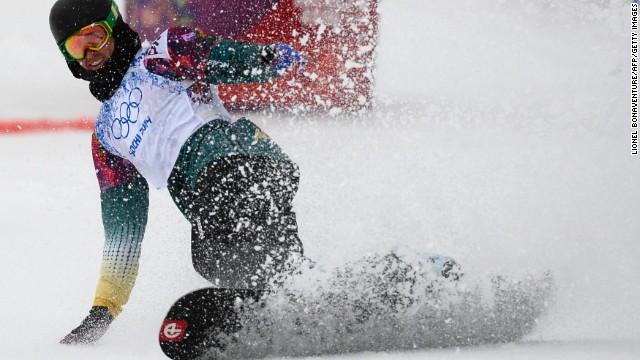 Arguably only three events at the Winter Games could be deemed low risk to athletes' health. That is to say, with a small chance of injury from speed, stage or equipment.

By my reckoning curling, cross-country skiing and biathlon are low risk, though even in the last discipline - given athletes are carrying a firearm - there is a potential for injury.

All the others border on the bonkers end of the risk spectrum when you take a moment to assess them. Other global sport competitions just can't match the feast of fear-conquering on show here.

In the Summer Games, the 100 meters is undoubtedly a tough competition to take part in, but the injury threat it carries can't be too dissimilar from a walk in the park.

Playing football at the World Cup carries the peril of dehydration (in hot locations for parts of Brazil) and, if you're very unlucky, the odd broken limb, but essentially the average Joe could give both of these activities a go without having to consult their insurance broker.

Not so in Sochi.

Take the skeleton for example. The plucky competitors in this discipline plunge head-first down a large ice pipe on little more than a tea tray at speeds close to 140 kph. It's not for the faint hearted, or really for the sane of mind if we're being honest.

Neither is the luge, the foot-first version. Who can forget the tragic circumstances in the first few days of the Vancouver Games, when 21-year-old Georgian luge athlete Nodar Kumaritashvili lost his life after losing control in a practice run.

In figure skating there's been a catalogue of injuries sustained from awkward falls and the mistimed swing of an skating blade. Outbreaks of violence are also common in ice hockey.

The ski jump is the closest an Olympic sport gets to sky diving without a parachute, while speed skating is a full-throttle slide into the barriers waiting to happen.

There there is alpine skiing, which entails screaming down the face of a snow-covered, rocky mountain as fast as friction will allow and without care for the injury that beckons form a high-speed mistake.

And these are just the traditional events. The new wave introduced to include sports more popular with the young are potentially even more threatening.

Canadian champion freestyle skier Sarah Burke died after injuries sustained on a halfpipe in Utah, competing in the same event which is now offering medals here in the mountains above Adler.

Slopestyle, whether on snowboard or skis, is extremely exciting offering the gymnastics of trampolining without the spring-mounted canvas for a landing. The adrenaline-fueled "cross" events are firm crowd favorites too.

Every snowboard cross race I witnessed in the build up to the finals involved wipeouts, sometimes involving multiple athletes. It's not surprising really given you have four riders, going hell-for-leather, sometimes just inches away from one another on an alpine assault course of jumps, bumps and banked curves.

Australian Cameron Bolton fractured a bone in his arm in the semifinals from a fall, but got back on his board to fly down the track one more time in the final.

He wiped out again and was in significantly worse shape at the bottom than he was on the race before. Blood dripped from his nose.

And let's remember there are still concerns over the extent of Russian cross skier Maria Komissarova's spinal injury which occurred during training at the Rosa Khutor Extreme Park.

Given I'm now in my mid-30s and take every completed game of football I play through as a minor triumph against my body's lifetime collection of niggles, small sprains and injuries, I can't help but wince and worry for these athletes.

Like motorsport, the great allure for the spectator is the courage these athletes display in the face of such danger.

Their disciplines remain a bastion for those who put their bodies on the line, they are sports for those with a screw loose and they are rewarded for their madness with medals.

Remember such courage next time you watch from the safety of your armchair. The Winter Games: more guts per athlete than any other major event.