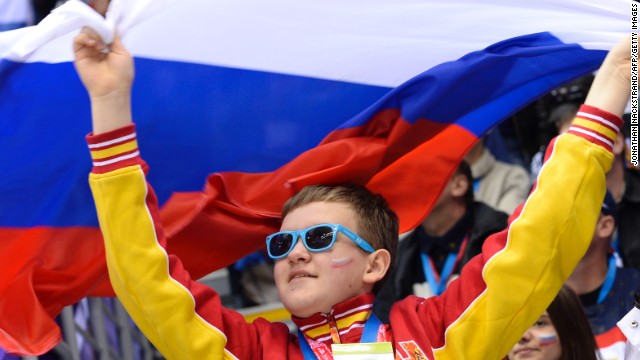 Ice hockey: It's the game that always takes top billing at the Winter Olympics, the men's final has a box-office appeal that no other event can match. And it's easy to see why.

The crowd is vociferous, partisan and passionate. The athletes put in shift after shift of lung-busting grind across the ice, the tackles are violent and plentiful, the play is slick and speedy, the goals are often spectacular and the organ music, emcee and Jumbotron combine to get you rocking in your seat.

When the arena is the Bolshoy Ice Dome in Sochi the effect has the atavistic hairs on your neck standing to attention before you've even sat down. As a first-time spectator experience, ice hockey had got off to a good start.

Rivalries in sport are so much greater when there is a symbolism to the result that reaches beyond the game. In a time when Russia is reasserting itself on the world stage, playing host to such events as the Olympics and World Cup, while America anxiously looks to a growing China as the second biggest global economy, there is much to ponder.

Not that such deliberations were in the minds of Alexander Ovechkin or Zac Parise as they took to the ice to help produce an enthralling game. It was the navy blue of the Americans that started the stronger, dominating the play and battering the white defensive wall of the Russians with wave after wave of attack.

But the home side regrouped, remembered the grudge and with renewed purpose moved into the lead in the second period through a goal by Detroit Red Wings star Pavel Datsyuk.

If the crowd had been febrile up to this point, the goal delivered a collective release of decibels so large it served to test the resolve of the newly installed roof. The ceiling survived by the skin of its teeth.

Like a pugilist dazed by a hook to the jaw but still with enough guts to resist the downward pull of the canvas, the U.S. steadied, shook themselves down and worked on the counter.

It paid off as Cam Fowler drew them level late in the second. The hot war between these two superpowers of the ice would now become attritional. The third was a gruelling battle that would test the energy of each of the side's NHL superstars.

The nature of the game played into America's hands, they dug in, kept hold of the puck and started to own possession once again. They plundered the Russian goal when Joe Pavelski hit home. It was a blow to the expectant home support and their volume dulled.

But their side produced a second wind. When Dustin Brown was sent to the box for kneeing, Datsyuk benefitted from a screen set by Alexander Radulov to slam home his second and draw the scores level. Then Fedor Tyutin thought he'd put his side in front before his goal was ruled out due to the net being nudged from its moorings.

The drama was so refined it would have made Leo Tolstoy proud. And all this was before the nail-biting, finger-chewing and hand-swallowing sudden-death overtime. America prevailed 3-2 after too many up and downs to mention and a goal to end the matter from T.J. Oshie.

For these great nations it was another chapter to add to their hockey history. For an ice-hockey novice it was a baptism of exquisite fire. Personally speaking, quite simply one of the most fantastic matches, of any sport, witnessed. Are all the games like this? If so, how marvelous would it be to have a rematch for the final.

So, where can I buy a stick?