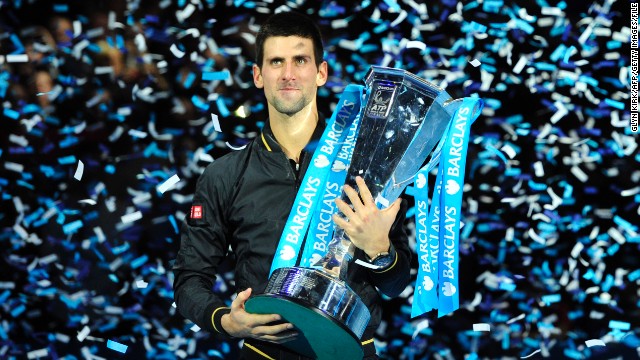 Here are nine reasons why the season-ending showpiece at London's O2 Arena is unrivalled by any other event on the tennis calendar:

1. No bad matches
Only the top eight players in the world qualify for the World Tour Finals, therefore every single match squares off two players who are at the very least grand slam semifinal caliber players.

There’s no risk of seeing a no-namer blown out in the first round by an elite player who never has to change out of second gear. Every single match pits the best players in the world against each other.

Some of this year’s first-round matches include Roger Federer against Novak Djokovic and a replay of the French Open final between Rafael Nadal and David Ferrer.

2. Round-robin format
Unlike the rest of the year, the ATP World Tour Finals splits the players into two round-robin groups of four, with the top two from each qualifying for the semifinals. This allows for players to lose one match, recover, regroup and potentially advance to the next round. This ensures the players in the latter stages of the tournament are the ones peaking at its conclusion, rather than the beginning. It also allows a player to have an off day and not exit the tournament.

On the five occasions that Pete Sampras claimed the title, "Pistol Pete" never once ended the tournament undefeated. In fact, on three occasions he won the final against the very player who had beaten him in the group stage - twice over Boris Becker, and once over Andre Agassi.

3. Indoor courts
Without interference from the elements, the fans attending are assured of seeing the matches on the billboard without rain delay. Equally, the lack of wind or extreme temperatures guarantees the highest level of tennis on the court.

4. Fast courts
Indoor courts tend to play faster, allowing for more varied styles of play which include the almost-extinct serve-and-volley game, unseen throughout most of the year.

This can, however, be detrimental to players like world No. 1 Nadal, who is yet to win the title.

5. You can watch every match
With every match taking place on a single court, fans could conceivably watch every single point of the tournament without having to purchase an expensive television package or miss out on any sleep.

6. Everyone has to qualify
The ATP World Tour Finals is the only event where no wildcards are offered into the draw, and no player is assured a place by virtue of being healthy and available. Every player on tour starts the season on a level playing field and has to earn their spot in the elite eight-man draw. This is not lost on the players who often cite qualification for the tournament as their goal heading into the season.

7. Pomp and ceremony
Rarely are the best players of any sport gathered together in one place, dressed up in matching suits and presented to the heads of state. Even the most jaded anti-establishment among us cannot help but enjoy seeing our heroes, outside their element, dressed up to the nines and on their best behavior.

8. Technological experience
With the event being indoors, in a climate-controlled arena, the opportunity to create a dynamic, energetic, technologically modern experience is not taken lightly by the hosts of the event. Every resource is used to create a rock concert atmosphere, with great music, pyrotechnics and lasers aplenty.

9. Year-end world No. 1 ranking on the line
Although world rankings are released every week, finishing the year as the top-ranked player in the world carries a far greater weight. With a ton of ranking points on the line and only a negligible amount of Davis Cup points available afterwards, this is the last chance to ensure that you will go down in the record books as the best tennis player in the world for the year.

This year's tournament will see Nadal and Djokovic battle it out down the home stretch to see who goes down as the best player of 2013.

And one reason why it used to be even better...

For many years, the ATP World Tour Finals was played on a custom singles court with no doubles alleys. This unique skinny look gave the event a cool feel, unlike that of any other tournament in the world.

By playing on a court that was unavailable and inaccessible to any other player in the world, it highlighted the elite status of the few who were granted access to play on it.

Since the addition of doubles in 2000, however, the tournament has been played on a regular court.

As much as I love doubles, and fully believe that adding the best eight teams in the world brings more entertainment value than is lost by removing the novelty of the custom court, I can’t help but miss that peculiar-looking skinny court.