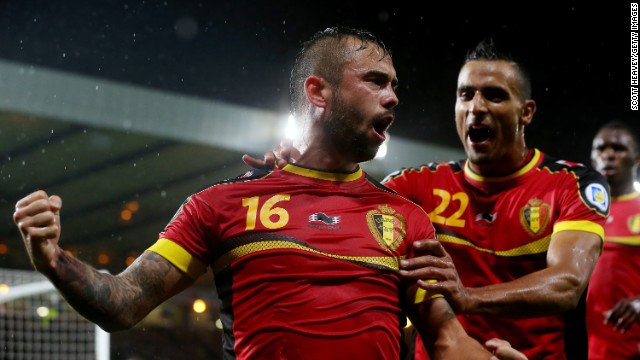 “We knew Belgium had a good team,” former Standard Liege coach Jose Riga told CNN. “But the surprise has been the way the team has played game after game with a lot of maturity.

“The quality was there, but you still have to build the team and in international football you often don’t have much time. What has helped is that the players have been together for a long time and know each other very well.”

As well as developing the “skills of the future game,” Riga believes the presence of “good men” has been key to Belgium’s success.

“In any story you need role models and examples,” said Riga, who made specific mention of Kompany and Hazard.

“By nature, the Belgium guys are humble. We don’t have the same mentality as the Dutch. They have quality, but they speak about it as well. In Belgium we are more introverted.

“But our players have gone to many countries and they have often transferred to big clubs at an early age, which is invaluable in gaining experience.”

England’s Football Association, which recently created a commission to examine the dearth of English players available to international coach Roy Hodgson, could be forgiven a tinge of envy at the depth of talent that is rolling off Belgium’s player production line.

On Friday, Belgium’s Under-21 side beat Italy 3-1 with a side that was so good that Anderlecht’s highly-rated 19-year-old Dennis Praet started on the bench.

Even younger is 17-year-old PSV Eindhoven striker Zakaria Bakkali, who in August became the youngest player to score a hat-trick in the Dutch league and is so talented that Wilmots is ready to fast track the youngster into his squad. Only injury robbed the youngster of the opportunity to make his full international debut against France last month.

“Some 13 years ago the Belgian Football Federation decided to reorganize Belgian football programs and set up in every province an elite academy,” leading Belgium youth football coach Michel Bruyninckx, who has long been interested in maximizing the way players use their brain in games as part of his innovative training sessions, told CNN.

“In collaboration with all the universities in our country and after studying the strategies of other countries the Belgian FA composed a plan with the new vision implemented in the different federation academies and then step-by-step integrated in the club programs.

“Just as importantly the Ministry of Education agreed to create a school curriculum to extend the number of weekly training hours.

“That meant we could guarantee young talents would have about 20 hours training time a week and their school programs were never in danger.

"The structure, organization and lifestyle in the academies was regularly checked to make sure that this project delivered professional players or highly qualified young people.”

This season Belgium's leading club side Anderlecht will compete in the Champions League with a squad that has an average age of just 22.5 years. One of Bruyninckx’s close confidants Dirk Gyselinckx is working with the Anderlecht youth teams which have been dominating at both national and international level.

“Anderlecht have won five of the eight national youth championships and many important European tournaments such as the Viareggio, the Aegon Future Cup and the Premier League Cup,” added Bruyninckx.

“The integration of many very young players in the first team is the proof of the success of what has happened in Belgium. Most of all Yoeri Tielemans, the 16 year-old player, who has surprised the whole of Belgium and is the product of the new strategy.”

Riga stressed that while the Belgian Federation had looked at the way other nations developed players, it had not simply “copied and pasted” what had worked in those countries.

“There’s no point in copying Spain," said Riga. "The education system is different as is the weather and culture, but it is good to open your eyes and try to understand these approaches.”

The former Standard Liege coach also warned that Belgium must not rest on its laurels.

“It’s a never ending story," added Riga. "You have to constantly search for the evolution of football. The coach has to anticipate the future game and if you want to have some advantages you have to try and anticipate to find the key to football success.”