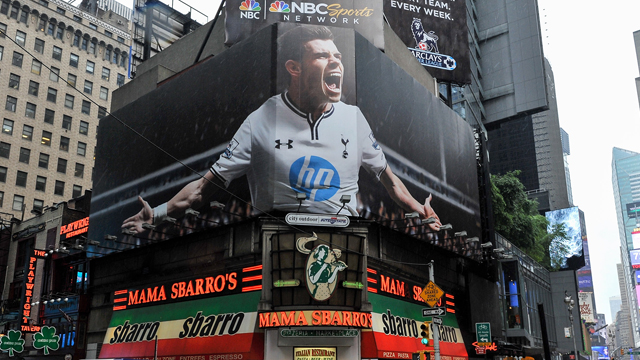 As manager of one of Spain’s two footballing giants his role almost dictates that verbal provocation is aimed west to the capital, but it’s not just the Catalan faithful who would have been sympathetic to the Argentine’s rhetoric.

As rumours that a world transfer record of €100 million ($133 million) could be set to bring Bale to the Bernabeu, many have found the value distasteful, grotesque and somehow out-of-touch with the austere global economic reality of 2013.

Strange that Martino felt so morally outraged - Barca stumped up a not-so-tiny €57 million to secure the talent of Brazilian hotshot Neymar as recently as June – but no matter.

Noughts are clearly offensive numbers and the thought of eight being used to value a football player is a further sign of the decline of European civilization.

Not that Real has good history in this department. For a team synonymous with Galacticos and gargantuan spending, Los Blancos became the first club to surpass revenues of €500m in a single year back in January (an increase of 7% on the previous 12 months according to Deloitte).

And these revenues are built on three, robust income streams: broadcast rights, matchday money and commercial profits, none of which are going anywhere soon and that contributed to a €200m profit for the club in the five years preceding 2012.

How many multi-national companies can boast such figures?

Not that Real, like few other clubs, have the power to create the megastar needed to recoup their outlay.

It’s a potentially profit-making, self-fulfilling prophecy: by signing a player for a headline-making fee the rising star becomes global phenomena in an instant.

Fans from Dubai to Delhi want to buy a Real shirt with the new hero’s name on the back and will salivate over watching him play on pay-per-view TV.

In short, a narrative of a superman is created that fans find hugely attractive, compelling to follow and worth investing in.

It’s one of the great dramas of football and a factor that has made it such a fertile franchise for attracting sponsorship.

Football is now a global entertainment in the modern day. Few complain about Tom Cruise earning around $35m a year (according to Forbes) for making films of utter dross but for some reason when it comes to asking a soccer star to perform week-in, week-out at the highest level, to compete in and often win competitions that captivate the world and to sprinkle football games that create huge profits with their genius, this is somehow beyond the pale?

Football is not the game of old, it’s as blockbuster as Hollywood and far more reliable to boot. The market decides the value of a player, and though poor value for money purchases are common, history would suggest Madrid –- or Manchester United, who have also been linked with the player - know the real deal when they see it.

Who doesn’t have sympathy with the thousands in Spain and around the world who struggle to find employment, but this should not deny a person earning what their talent deserves. If and when the Bale deal takes place, this sentiment will surely hold true.

Bad luck Bruno Labbadia, who became the first coach sacked in the Bundesliga just three games, and three defeats, into the season. Stuttgart announced on Twitter they had parted company with the 47-year-old after a 2-1 defeat to Augsburg. German football writer Raphael Honigstein felt the board had to act but that a sacking in August doesn’t reflect well on anyone.

Well done Elche, who played their first top-flight game in Spain for a quarter of a century and scored within five touches from kick off. “Not since the fall of the Berlin Wall had Elche been in La Liga. Eight thousand, eight hundred and thirty-three days later, the Martínez Valero stadium hosted a top-flight game at last, with 23,859 fans in attendance. One minute and 18 seconds later it erupted: Elche were in front,” Spanish football writer Sid Lowe commented.