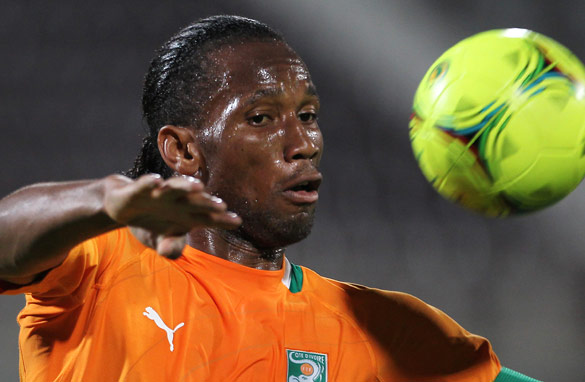 However, just because three traditional contenders didn’t make it doesn’t mean we shouldn’t care about the competition. Quite the opposite. There are other emerging powers on the continent and plenty of new players to discover over the event's three weeks.

Here are my tips on some of the teams and young players to watch out for. What do you think? Please let me know if you've spotted players that I've missed.

Ivory Coast: My favorites to win the competition. The Elephants are the complete package: they have the talent, the spirit and the experience, with eight players of the regular starting XI boasting over 50 caps each. With a backbone featuring the Toure brothers and Didier Drogba, this is a team that will be hard to beat. They won all six qualifiers, scoring an average of over three goals per game, and are on track to capture their first crown since 1992.

Morocco: So much potential, so little substance. For years and years, Morocco has produced skilful players only to see them underachieve in major tournaments. This year it could be a different story. Manager Eric Gerets, one of Belgium's most-capped internationals, has introduced a winning mentality and the players seem to be taking to it. Watch out for the trio of talented midfielders: Houssine Kharja, Mbark Boussoufa and Adel Taarabt, who play in Italy, Russia and England respectively.

Senegal: The Lions of Teranga shouldn’t have any trouble finding the back of the net. Their forward line boasts the likes of Demba Ba, Moussa Sow and Papiss Cisse, all players who have been scoring goals for fun in England, France and Germany respectively. Add captain Mamadou Niang to the mix and you get an idea of just how good Senegal will be going forward. What about their defense? Well, they showed during qualifying that keeping clean sheets isn’t a problem either, conceding only two goals in six matches. Believe or not, the western African nation has never won the title. This year could change that.

Mehdi Benatia (Morocco): Finding skilful attacking players has never been a problem for Morocco, but to get a defensive general like Benatia is truly a blessing. The 24-year-old center-back has marshalled the last line impressively for Italian Serie A club Udinese and is now looking to carry over his stellar form into the African Cup of Nations.

Kwadwo Asamoah (Ghana): When talking about Ghana, it’s easy to praise the talents of Asamoah Gyan and Sulley Muntari. However, there is a new kid on the block who we should definitely not overlook. Kwadwo Asamoah is a central midfielder who could be the heir to Stephen Appiah’s throne. The 23-year-old, who also plays for title-chasing Udinese, is calm and composed on the ball. His tenacious tackling earns him a lot of respect in the center of the park.

Djalma (Angola): The speedy striker has improved dramatically over the last couple of seasons, plying his trade in Portugal’s first division. He impressed at Maritimo, earning a move to Europa League champions FC Porto in the summer. Many pundits expected him to struggle to make an impact, but Djalma has broken into the starting XI and at the age of 24 is showing that he could have a bright future with his club and country.