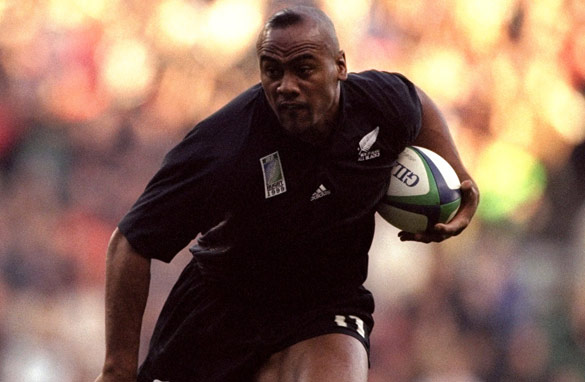 Jonah Lomu's 15 World Cup tries have secured his place in our World Cup XV, but who else has made the cut?

So, I preface my selection of the best rugby World Cup XV of all time by saying that this is very much a side that I would want to watch. As a journalist, you need to think about balance and neutrality, but I’ve indulged myself here.

For me, sport at its most uplifting is about grace and poise, the balletic as well as the brawn; I like to see athletes make the mastery of their game look easy, as if they were born to do it. My ultimate World Cup XV has plenty of grit but, above all else, these players would be entertaining to watch - simple as that.

Huge for a front rower. Tall and powerful, and a double World Cup winner. Hard to argue with that.

A leader on the field and part of New Zealand’s only World Cup winning team. Fitzpatrick was a great reader of the game and has proved that as a pundit since retiring.

Embraced the sport’s race towards the notion of total rugby. In England’s 2003 World Cup triumph, Vickery showed that props could play with the ball in hand too.

The heart and soul of England’s 2003 World Cup victory –- although he’d never agree. Led by example and intimidated opponents with his sheer presence. Still does.

Maybe not the most inventive or skilful openside ever but this is a sentimental choice. Like Johnson, an inspirational captain and him receiving the 1995 trophy from Nelson Mandela is the most iconic image in World Cup history.

Although he played at six in his prime, I wanted to make room for Pienaar and still include Jones. Adored in New Zealand, despite an injury-plagued career, he set the mould for the modern, rampaging back row forward.

Like his contemporary above, Zinzan Brooke is rightly regarded as a legendary All Black. He played in three World Cups, combining fearlessness on the field with speed and sublime rugby skills.

Tenacious and quick, Gregan has played more World Cup matches than any other Australian. Often an attacking spark in his country’s victorious 1999 campaign.

This won’t be popular with the Jonny Wilkinson fans but, Lynagh’s play was easier on the eye. Just as reliable a kicker as England’s 2003 talisman, Lynagh also has four World Cup tries to his name.

Rugby’s first global superstar and scorer of 15 World Cup tries, more than anyone else. At the time, his sheer size was unique for a back and only Lomu’s health problems prevented him making an even bigger impact on the sport.

Small but not for the era he played in, Horan had a recurring knack of spotting gaps in the opposing midfield and using an impressive burst of pace to exploit them.

Guscott never ran across the pitch, he glided. A joy to watch, which is why he gets the nod ahead of fellow Englishman, 2003 World Cup winner and scorer of seven World Cup tries to Guscott’s four, Will Greenwood.

Strictly, a right winger but Campo could almost go anywhere. The ultimate love him or loathe him player. Attempted things on a rugby field that no-one else would, and not always successfully. Bagged 10 World Cup tries in total.

Sheer, gallic class. Like Campese, a rugby maverick. Blanco smoked like a chimney, and could fuddle the opposition with a silken touch, pace and vision. Crucial in France’s path to the 1987 final.