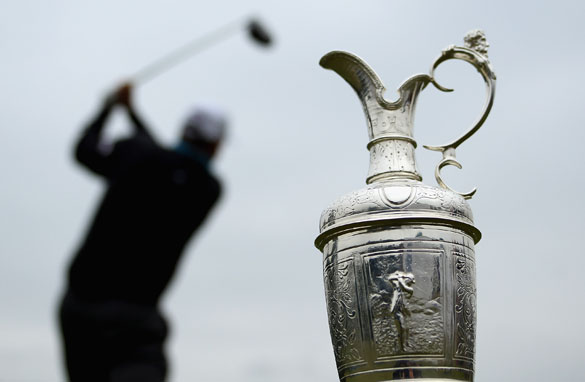 The Claret Jug is the prize for the golfer who conquers the often treacherous British Open with least shots.

Watching the world’s best golfers grapple with Royal St. George’s this week underlines the romantic notion that only historic links provide a true test of a top player’s skills. You can keep the manicured perfection of a modern championship course like Augusta - the rugged brutality of the British Open is golf’s most pure, and often punishing, experience.

The U.S. Open is loved the planet over, while The Masters will try the patience of even the most talented of competitors (just ask Rory McIlroy) but neither Pebble Beach nor Augusta National can match the wild vagaries thrown up by the courses on the British Open rota – Muirfield, Carnoustie, St. Andrews, and the rest.

Each is different but what they have in common sums up the tournament’s appeal and, also, its frustrations.

Only on the dune-covered ground at a British Open can so many perfectly-struck shots be, accidentally, deflected off fairways or greens; can a player contend with wind, rain, hail and sunshine all in the same round; can competitors face numerous blind tee shots and approaches; can irons be bounced into the greens from a hundred yards out; can a 7-iron be needed one day, and a 3-wood the next, simply because the wind has changed direction.

Is it a fair test? Not always. But any of us who have studied and played golf know the sport is often used as a metaphor for life itself: the rough must be taken with the smooth; fairness is the goal in the face of the vagaries of justice; hard work and practise will get rewards if matched with patience.

These are all qualities that professional golfers must learn if they are to be successful, and the British Open gives them a crash course.

This is not a nostalgic hankering for a bygone age. It's not a call to return to hickory clubs and “feathery” balls, but there is something deeply satisfying about watching more than 150 skilful players suffer the trials and tribulations thrown up by a 124-year-old links.

At times Royal St. George’s looks like an expanse of unkempt, unused coastline where a golf course has accidentally broken out. Some of the television coverage hasn’t helped, with camera lines catching the shanty-like broadcast compound in the background.

It can’t compete with the prettiest course on the men’s golfing calendar – Augusta National. Masters organizers are said to dye Rae’s Creek blue and use green sand in the divots to avoid any blemish to their multi-colored, azalea-ringed wonderland. Nick Faldo was, famously, inspired to take up the game after watching Jack Nicklaus show off his skills around Augusta’s immaculate setting.

However, no matter how tough a round a golfer has had at Augusta National, none of them have threatened to never come back – as some pros did after particularly harsh weather at Carnoustie in 1999 and Royal Birkdale three years ago.

The sport’s stars may not always like it, but the natural, ancient and stiff test provided by Britain’s Open is golf’s most compelling spectacle.