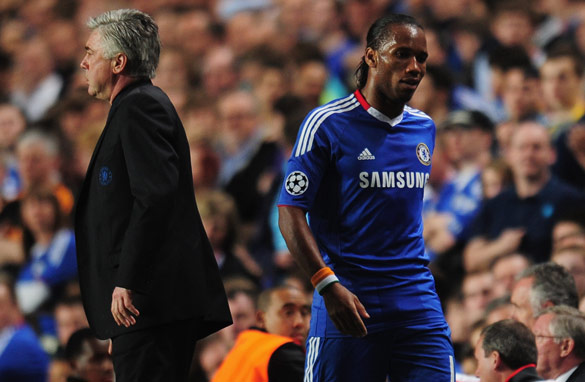 Last week, in the first leg of this tie, I had the opportunity to sit a couple of rows behind the Chelsea bench at Stamford Bridge.

What I saw during the game should worry everyone who is interested in Chelsea’s immediate and long-term future.

There is no question Ancelotti made several mistakes which could ultimately cost his team a place in the final four of Europe’s top club competition.

Let’s start with team selection. The Italian manager lined up with Didier Drogba and Fernando Torres up front.

He made this decision even though Nicolas Anelka was the side’s top scorer in the Champions League with seven goals in seven games and even though Torres had failed to score a single goal for club and country in over 11 hours of play.

What message did he send to his team by doing this? Surely, only that factors other than form - namely a £50 million price tag - dictate tactics.

This was hardly the rallying cry needed before such a key contest. Ancelotti needed team unity but by unsettling Anelka, is in risk of upsetting the core of his squad and many of the established internationals in the side.

As bad as this pre-match decision was, the Italian coach could have made amends during the second half of last Wednesday’s game. However, in the face his side trailing to a brilliant Wayne Rooney goal, he changed nothing; he left Torres toiling on the pitch.

The Spaniard was running and working as hard as he could, but it was clear he just did not have a goal in him.
A first-half chance to redirect a Drogba cross into the net was missed, and for all his huffing and puffing, there was little or no end result.

If I couldn’t understand why Ancelotti was sticking with Torres, just imagine what Anelka was thinking.
I watched the Frenchman warm up in front of me, looking like a man with little motivation and little purpose.

We all know he is not exactly the most driven player on the planet; it is not by chance that he is known as “The Sulk”, but on this occasion he had good reason to feel aggrieved. Finally, with 20 minutes left, Ancelotti decided to make a change.

The crowd spurred Anelka on as he jogged over to the bench to receive instructions from the Italian manager. However, what I saw next revealed that Carlo has lost the plot.

It started with a conversation that the coach had with the player before he came on. As Ancelotti started talking to Anelka, the striker did not look at him or acknowledge him once.

I am assuming Anelka listened to what his manager had to say, but just stood there motionless, before slowly walking to the sideline to come onto the pitch.

At this point, I and most of the Chelsea fans were expecting Anelka to come on for the ineffective Torres. We were wrong. Instead it was Drogba who was taken off. The Ivory Coast international couldn’t understand it. He looked at Anelka in disbelief and started making his way off the pitch with a sarcastic smile on his face.

As he left the field of play, he couldn’t help himself and just started laughing. He didn’t think about whether Ancelotti saw him or not, but then again, at that point in the season and of his career, Didier probably didn’t care. He walked over to the bench, sat down, and continued to chuckle.

While you could be tempted to judge the attitude of Didier, Nicolas or any other player which reacted in disbelief to this substitution, let me just say that I understood their frustration.

This is a team that has been desperate to win the Champions League for several years. They have made at least the quarterfinals in five of the last six years.

They lost a semifinal against Liverpool with a goal that may not have gone in. They lost a dramatic final on penalties to Manchester United. This is a group of players who have given their bodies and souls to win this competition. So if they are upset at not being allowed to do what they feel they can do, I can sympathize.

So what did all of this mean?

First of all, it clearly showed that Ancelotti has lost the dressing room. He will be on the way out this year unless he wins the Champions League, which considering the current state of affairs, doesn’t look like its going to happen.

Ever since Torres was signed, it has been clear to see that he has struggled to manage his strikers and is now paying the price.

I wonder if Roman Abramovich is pushing Ancelotti to play the Spanish striker, just like he pushed Jose Mourinho to play Andriy Shevchenko a few years ago. It created tension then and it is creating tension now.

Unless Carlo works a miracle and manages to right the ship in time for Tuesday’s showdown, then Chelsea are doomed to win absolutely nothing this season.