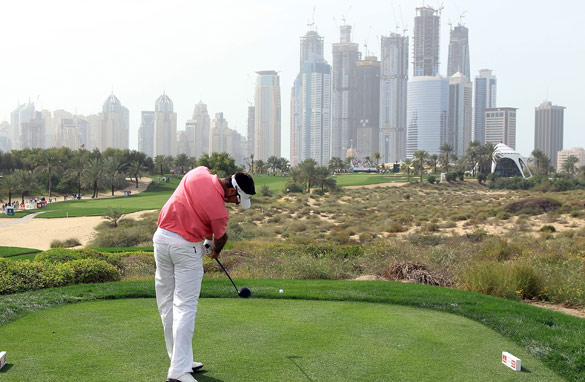 Fast forward 22 years and the Desert Swing is well and truly a reality, given that the Tour now spends four successive weeks at the beginning of the season in this arid, oil-rich region, chasing not only the sun but some serious purses provided by a steady stream of top-class sponsors.

There are now five tournaments in the Middle East, including the Dubai World Championship which concludes each season.

Our trip brought us to Kuwait and Bahrain. Two countries that have been slower than their near-neighbors to develop golf as a tourist attraction.

Kuwait, for obvious reasons, has been lagging somewhat behind the likes of Qatar and the UAE, but its expansion since the first Gulf War in 1990 has been impressive and very encouraging.

Golf has been a factor here since the late 1940s, catering mainly for the extra-curricular needs of the multitude of ex-pat oil workers.

While sand courses have been the norm, grass courses like the Sahara Golf Club have shown what is possible in terms of developing the game and tourism, in this small nation known as the Gate to Iraq.

The feeling amongst those passionate about its prospects, see the Iraqi re-development as the catalyst for further progress and also the elevation of Kuwait to resort status in tandem with its rich oil reserves.

In the short-term however, it will have two 18-hole grass courses, with plans to add about four more depending on government support.

With that, comes the understandable ambition to field an Olympic golfing team for the Rio Games in Brazil in five years time, but only time will tell.

Bahrain meanwhile, has now been added to the mix and given the success of their amateur teams over the last 20 years in Gulf State competition, it would be no surprise if a native Bahraini were to make their presence felt in the coming years on Tour.

The Royal course is the crown jewel, and expensive to boot, but there is a commitment to hone the skills of locals along with the extensive ex-pat population.

Youth programmes are helping to make the game accessible to more of the country’s youngsters, and the arrival of a top class event like the Volvo Champions event should certainly shine a light on Bahrain as a golfing destination.

Shane O’Donoghue is the new Host of Living Golf on CNN. Twitter: @shaneodonoghue