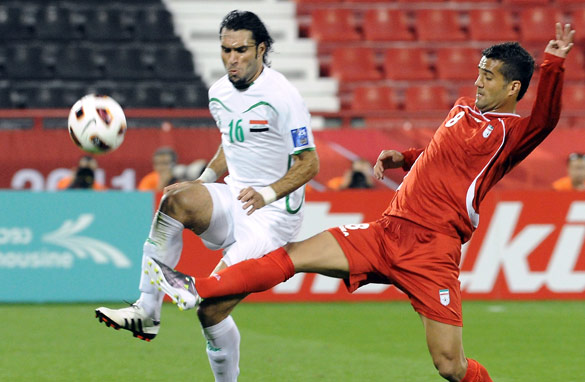 The much-anticipated clash between neighboring Iran and Iraq was played in a half-empty stadium.

The Iran vs. Iraq game was billed as one of the highlights of the 2011 Asian Cup in Qatar. Two giants of Asian football with passionate support and a shared past that has been bloody and violent.

In anticipation of a bumper crowd, street hawkers gathered outside the remote Al Rayyan stadium, 15 miles from the capital Doha, to sell maroon vuvuzelas (the color of the Qatari flag), scarves, flags and packets of sunflower seeds. But business was surprisingly slow.

The supporters from both sides - largely ex-pat Iraqis and Iranians living in Doha mixed with several who had flown in from as far as Shiraz, Tehran, Oslo and London - were loud and vociferous outside the ground, chanting their teams' names as they entered the stadium. But inside, a different picture was painted.

The match was seen as a clash of the heavyweights, not to mention bitter rivals, but you would not have known from the half-empty stadium. That this represented a relatively good turnout compared to the other matches tells its own story, and points to the big challenges – not insurmountable ones but challenges nonetheless – facing Qatar in 11 years' time.

This is the first opportunity to take a look at what an international football tournament in Qatar would look like after it won the bid to host the 2022 World Cup. There have been a lot of positives. The stadiums, training pitches and facilities are all of a standard you would expect at the highest end of the sport. “World class,” in the words of Iran coach Afshin Ghotbi.

But almost all of the matches so far have been cursed by the same problem: poor attendances, with almost all but those matches featuring the home nation suffering. There aren't many international matches where North Korea provides a competitive proportion of the crowd – after all, it is virtually impossible for its citizens to leave the country – but that was the case at the sparsely-attended Group D clash with the United Arab Emirates, which ended goalless. Consider too that in 2022, the stadiums will be five times the size.

That the marquee Iran-Iraq game was half full was equally as surprising. The one game, other than Qatar’s opener, to be remotely packed so far was India’s clash with Australia, and that was only because a few Qatari construction and chemical firms had laid on buses for several thousand Indian workers, given them the afternoon off and paid for their tickets.

It could get worse if Qatar fail to progress.  If they don’t, then there is a real fear that the latter stages could be even more bereft of fans.

There are, of course, huge caveats. Qatar is a relatively new country - it has only existed since 1971 – and has a tiny population. Understandably, the football culture is much less developed. And Qatar is a long way from East Asia, meaning that the Japanese and South Korean fans, the most vociferous and well-traveled of the region's supporters, have probably been priced out by simple logistics. But it won’t stop the naysayers from bashing Qatar once again.

Qatar has the money to stage the World Cup, no doubt, but will it have the team and the fans to back it up? They have 11 years to prove the world wrong.