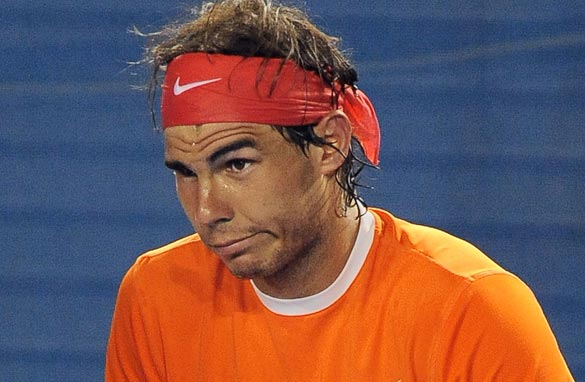 Tendinitis has got the better of him, it seems, more times than an opponent. Just recently it was in his shoulder, before that in his knees. He cannot push it to the limit every single time, so it’s no surprise that he has reduced his schedule. Our loss – hopefully his gain!

Roger Federer is very selective when it comes to tournaments and is very rarely injured. I believe that will stand him in good stead next year. He had a so-so 2010 but finished on a high note after winning the year-end championship with a morale-boosting victory over Nadal.

He is, in my mind, the favorite to successfully defend his Australian Open title and will also win back his Wimbledon crown as he looks to silence the nay-sayers who have argued that his best is in the past.

Novak Djokovic and Andy Murray must be contenders in all four of the majors. Djokovic was incredible for Serbia in their historic Davis Cup win and always seems to be in the mix in individual events. It’s high time he added to his lone slam. Murray has yet to get off the mark in the big ones, but at only 23 he has much time, talent and will-power on his side.

Perhaps Robin Soderling can break open the top four, or even a fit-again Juan Martin del Potro, but it’s hard to see anyone else lifting a major next year.

I predict Federer will win in Australia and London, Nadal will take the honors in Paris and Djokovic will come good in New York. Not really going out on a limb, am I?

As for the women – well it’s much, much harder to predict.

For one thing, we have no idea when Serena Williams will return to the game. I interviewed her earlier this month and even she couldn’t really say. She’s been suffering from a mysterious leg/foot injury since July and still has a cast on. It’s going to take her a while to get her strength back after it comes off.

So that means Caroline Wozniacki could get a really firm grasp on the world No. 1 ranking. The young Dane has everything needed to win a major. Once she wins one, the pressure will be off and she could run rampant.

Vera Zvonareva had a very strong year, reaching two Grand Slam finals. Her head got in the way of both occasions though – so that’s something that needs to be sorted out if she’s going to break through.

Kim Clijsters, Maria Sharapova, Venus Williams and Justine Henin - all former number ones - were bit-part players in 2010. I hope for the sake of the women’s game that the same won’t be true come January. The WTA Tour badly needs all four back and contending.

Ana Ivanovic returned from the abyss to have a great end to the year. She’s another popular player who can create headlines. Perhaps she can add to her French Open title? I’d like to see it happen.

There’s a group of girls who are just on the periphery of greatness. One is Victoria Azarenka, whom I interviewed in Florida recently. She was tipped for the 2010 U.S. Open crown before departing in the second round with a concussion. Remember that?

The 21-year-old, 6’3" Belarussian quickly recovered from that setback to make the year-end championships for the first time and finished in the top 10. She is what TV broadcaster Mary Carillo calls a “big babe” and has tremendous mental strength along with physical presence.

Could this be the year of Vika? Quite frankly, I have absolutely no idea.

You’d probably have more chance of predicting the major winners by putting on a blindfold and randomly picking someone in the top 20!

I don’t have a blindfold, so here I go: Wozniacki will win in Australia, Ivanovic will take the French, Serena or Venus continue to own Wimbledon, and Clijsters will retain her title at the U.S. Open.

On the year-end number one ranking front, I’ll go for Federer and Clijsters. We’ll find out in 12 months' time if I’m right, or horribly wrong!