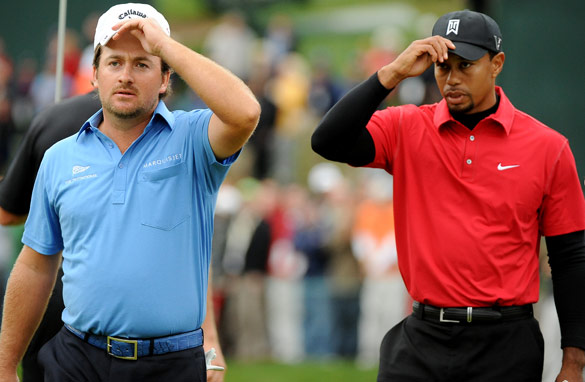 How could it not be? Shed of his aura of invincibility by a humiliating scandal, Tiger had to suffer the indignity of a missed cut, an 18-over-par performance and ties for 46th and 78th place. He didn’t win anything in 2010. No majors, no tournaments, no skins games, nothing.

Will he ever recover the prowess that made him a sporting legend and a global celebrity? Perhaps. But the golfing landscape has shifted so seismically in the last 12 months that the question can no longer be asked in isolation.

Tiger used to intimidate his opponents by his very presence. It was said that with Woods in the field, the rest would concede him a stroke every round. These were players that crumbled in his company, players that didn’t think they could beat him and didn’t know how it felt to win major trophies.

And these were just the Europeans. Closer to home, Phil Mickelson and Jim Furyk have still got it, Jeff Overton, Bubba Watson and Rickie Fowler have become established. Dustin Johnson could easily have won two majors in 2010.

Tiger would seem to be on the way back. Augusta was the venue for his long-awaited comeback in April, but August marked the turning point. With a new swing coach, Sean Foley, in his corner and a painful divorce completed, he was able to focus on his game.

But with the competition now ranged against him, I think he’ll have to be even better than he once was if he’s to match or overhaul the record of 18 major titles held by  Jack Nicklaus. At the end of the day, it’s against Jack’s record that he will be judged.

As for 2011, I believe it’s the rising tide of European golfers that will outshine him on the major stage.

They used to ask what golf would be without Tiger Woods. With the new generation allowed to flourish in his absence, the sport has just got a whole lot more interesting.