Madrid may have Mourinho, but Barca will still be best 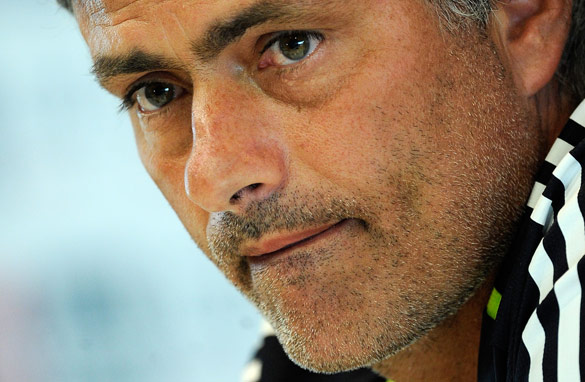 Jose Mourinho will have to wait for the La Liga title according to CNN's Pedro Pinto.

New season, same old story. In my mind, there is no way Barcelona's dominance of Spanish football will end this year, even if you consider Real Madrid will no doubt improve under the guidance of Portuguese coaching maestro Jose Mourinho.

The two-time defending champions are just too strong and too solid to finish below their old rivals in the league table. And while I'm in the predicting mood, here's my forecast for the other movers and shakers for the forthcoming season in the Primera Division

Last season, Barca and Real staged a duel of epic proportions. It was a case of "whatever you can do, I can do better." When the dust settled, Pep Guardiola's side had set a new record for points, while Real came close to beating the mark for most goals scored.

This year, both sides will push each other all the way once more, and in my mind, the same team will come out on top. Considering Barcelona picked up one of the best strikers in the world in David Villa to play alongside Leo Messi and Pedro up front, it means they will be virtually unstoppable. Even if Zlatan Ibrahimovic spends his time pouting on the bench more than poaching goals, and even if the fragile Andres Iniesta succumbs once again to injury, this team is just too good to fail. With Xavi running the show in midfield, they will dazzle their opposition in Spain and finish first.

So what about Real Madrid, you ask? Well, they will improve. Especially at the back. Jose Mourinho is known for his safety first approach and Los Blancos will concede less goals than they did last year. However, like the Portuguese coach admitted himself, it will take a while to get the best out of his players. The Special One revealed his team will only be truly special after the second season he is in charge, so they will come up short this year.

An X-Factor that will affect the title race in Spain is how far both teams make it in the European Champions League. Real president Florentino Perez is obsessed with winning the competition again, and Mourinho himself will prioritize Europe's top prize ahead of La Liga considering they haven't won it since 2002. Barcelona could also put Europe first since they have won the last two domestic titles and what they really want is to rack up their Champions League trophies while in possession of the best team in their history.

This is a really tough one to call because there are so many teams that could surprise this year, but I am going with Valencia.

Considering they lost David Villa, David Silva and Nicola Zigic, many could believe Los Che would tumble down the league table in the coming campaign, but I believe they will still manage to qualify for the Champions League.

Why? Well for starters, although they needed to sell some of their top players in an effort to balance the books, Valencia have a great head coach in place. Unai Emery is a diligent student of the game and proved last year that he has a knack for making his team better than the sum of its parts.

Secondly, there is still plenty of talent in this squad. World Cup winner Juan Mata, Argentine midfielder Ever Banega and winger Pablo Hernandez are all exciting young players. Add to the mix veterans like David Albelda and Joaquin, and you have a promising season ahead.

Their close-season signings were also very impressive. Strikers Roberto Soldado and Aritz Aduriz, who between them scored 28 goals for Getafe and Mallorca last season, should get plenty of goals at the Mestalla, and Portugal central defender Ricardo Costa is also a good acquisition.

My verdict is that Valencia will finish fourth, behind Barcelona, Real Madrid and Sevilla.

Expectations are always so high at the Vicente Calderon, and more often than not, Los Colchoneros don't live up to them. With stars such as Diego Forlan, Sergio Aguero and Simao Sabrosa, this team should finish in the top four. However, from what I hear, the atmosphere in the dressing isn't great and I don't think the players will put their bodies on the line for coach Quique Sanchez Flores.

Last season, Atletico finished in a disappointing ninth place and I don't see them climbing a lot higher in the new campaign. Their recent signings don't impress me too much and consequently they will once again flatter to deceive, with Forlan and El Kun scoring their share of goals.

This is a tough one to call because both Barcelona and Real will score a LOT of goals this season, and both teams feature several players who could finish on double figures. At the Camp Nou, David Villa's tally could eat into Messi's haul, but the Argentine superstar will once again win El Pichichi title.

Cristiano Ronaldo, who had 26 goals in 29 league games last season, will see his total go down. I believe Mourinho won't want the team to be CR9-dependent and therefore expect Higuain, Kaka, Di Maria and others to pitch in with their fair share of strikes.

An outside contender is Roberto Soldado. He has a great goalscoring record since leaving his hometown club Real Madrid, netting for fun at Osasuna and Getafe. He should get plenty of chances at his new team, Valencia, and could finish the season near the top of the charts.