Spain: The greatest of all time? 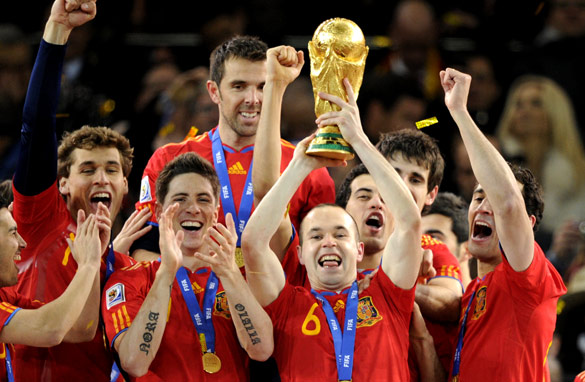 Johannesburg, South Africa (CNN) - After 64 games and 145 goals, we have new world champions. And worthy ones at that. Spain were the best team at the 2010 World Cup, and they deserved to take home the trophy from South Africa.

As I walked away from Soccer City Stadium on Sunday night, I felt privileged to have watched, in person, one of the best national teams of all time. You could argue the contrary, saying they scored only eight goals in seven games, but I can’t recall watching a national side that played with the class and the skill La Furia Roja did here in the Rainbow Nation.

In my view, the only reason Spain didn’t score more often was that every team they faced played in a counter-attacking style and tried to close every path to their goal.

So let’s look at why Spain were so good.

The first comment to make is an obvious one and it concerns the chemistry in their midfield. Andres Iniesta and Xavi have played together at Barcelona for eight seasons and it shows. It seems as if they work by telepathy, exchanging pass after pass with ease.

Now one can’t forget that both midfield maestros are able to do what they do best, thanks to two unsung heroes in the center of the park - Xabi Alonso and Sergio Busquets. They defend when they have to and help with the transition of play every chance they get. As we say in Portugal, they “carry the piano” so Xavi and Iniesta can play it.

At the back, the player who impressed me the most was Sergio Ramos. He added a dimension to Spain which few teams had in this competition. The Real Madrid star was always willing to gallop forward when needed and he created chance after chance for his teammates. In the final, he could have scored twice with dangerous headers. For me, he was simply outstanding.

At the heart of defense, Gerard Pique was imperious and Carles Puyol effective. The Barcelona captain also became a hero in this competition by scoring the goal which beat Germany in the semifinals.

Moving forward on the pitch, David Villa was his usual lethal self up front. He hit the back of the net five times and could have finished the competition with more goals had it not been for inspired goalkeeping from Spain’s opponents. The new Barcelona signing leaves the World Cup with his reputation enhanced and his price tag of 30 million Euros suddenly looks a bargain.

One final word about the Netherlands. Their unbeaten run came to an end at the worse possible time. Under Bert van Marwijk they had gone 25 games without tasting defeat. On the big night, they just weren’t good enough. Wesley Sneijder had a quiet game, and Robin van Persie was a shadow of his former self. It shocked me, actually, to see how disinterested the Arsenal man was at times. His nation deserved better.