Lessons learned from the 2010 World Cup 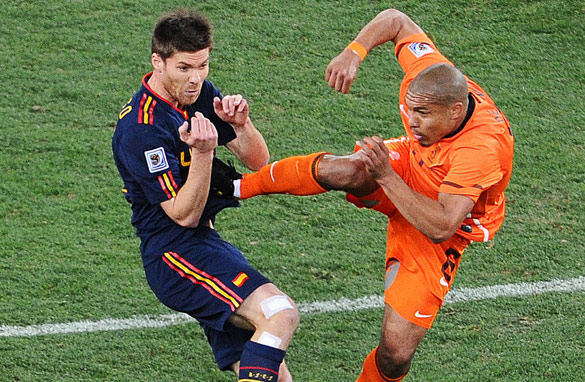 Atlanta (CNN) - Congratulations to Spain for deservedly claiming their first World Cup, but man, what a terrible final. It was never going to be a classic, mind you, with the Netherlands compelled to break down Spain’s midfield artistry by hook or by crook - or risk being passed to death.

However, the cynicism of the Orange went way beyond what many believed they were capable of, even provoking the Spaniards into some football that was very unlike their usual renowned "tiki-taka" style.

In the end though, the best team won. Well, to my mind, the best team on the day but the second-best team in the tournament. I thought that, apart from the semifinal, Germany played more incisive football than the Spaniards, whose short passing often failed to produce the clinical finish their elaborate interchanges deserved once David Villa went off the boil following the quarterfinals. And, let’s be honest, eight goals in seven games by La Roja tells its own story. But a win is a win, whether you do it by one goal or a hatful.

So, apart from the fact that Spain rules, what else did I learn from this World Cup?

Well, I think that the continued homogenization of football - with players moving freely between clubs of different countries, and those clubs being so familiar with each other through Champions League encounters - makes for too little contrast in styles to produce great matches.

There seem to be only two ways of playing nowadays: defend in numbers and catch teams on the break, or frustrate your opponent by playing endless keep-ball and eventually nicking a goal by attrition as Spain did time and again. Both methods can produce the desired result, but don’t necessarily get you off your seat too often.

The second thing I learned is that football has got to come into the 21st century by any means necessary. Goal-line technology, video replays, five match officials or more (with the pace of the modern game why not have a referee in each half as well as someone on either goal-line) - whatever it takes to get the decision right.

Some may reject the idea, but if you do so on the grounds of expense, check out world governing body FIFA’s 2009 annual report and you’ll find it announced profits of $196 million and boasted reserves in excess of $1 billion, which is more than enough for a few-dozen cameras and some replay machines.

If you feel the use of technology would be undemocratic because it couldn’t be universal, well no-one is saying we should have five officials and a battery of technical equipment for games between Tiny Town Rovers and Mickey Mouse United - only at the highest level where so much money and prestige is at stake.

And if you don’t want the additional safeguards because it takes away the human element - well it does, it takes away human error, and there is no definition I can find in which error is a good thing.

The third thing I’ve learned is that the rules of football need to evolve. With the proliferation of cautionable offences I’d like to see the introduction of another card, perhaps a blue one, because at present players get the same yellow card for some minor transgression like kicking the ball away in petulance as they do for a scything tackle.

Two blues could equal a yellow, two yellows make a red. That way the punishments could fit the crime, and you wouldn’t see players or referees hamstrung for the bulk of a game because of a card awarded for a small infringement in the first few minutes.

I’d also like to see penalty goals awarded for a handball on the line that stops a certain goal. Asamoah Gyan should never have been put in the position of having to take a penalty during extra-time of Ghana’s quarterfinal with Uruguay, because he’d already have scored but for Luis Suarez’s "professional" handball. Rugby has a penalty try, so why not a penalty goal?

And, on the issue of halting play for supposedly injured players, why not have a mandatory two minutes off the field for anyone who requires the game to be stopped for treatment? If you’re really hurt, you need at least that amount of time to recover. If you’re faking, you punish your own team. That would stop simulation in a hurry, wouldn’t it?

Finally, I’ve learned that the idea of football being a great leveler is not empty rhetoric. For me, the highest compliment I can pay to the organizers of Africa’s first FIFA World Cup is that - aside from the drone of the vuvuzelas, which by the end of the tournament were being blown by just as many non-Africans as Africans - this tournament appeared no different to any other in terms of the ambience and efficiency.

FIFA president Sepp Blatter wanted a uniquely African World Cup, but he didn’t get one. And that’s a good thing, because, as a part African myself, I suspect the uniqueness he was talking about was based on a cultural image rooted in the continent’s colonial past.

Instead, we saw a modern Africa hosting a modern World Cup which in many ways was indistinguishable from any that had gone before it. And, in a rainbow nation, maybe that’s the way it should have been, because, under the skin, we’re all the same.