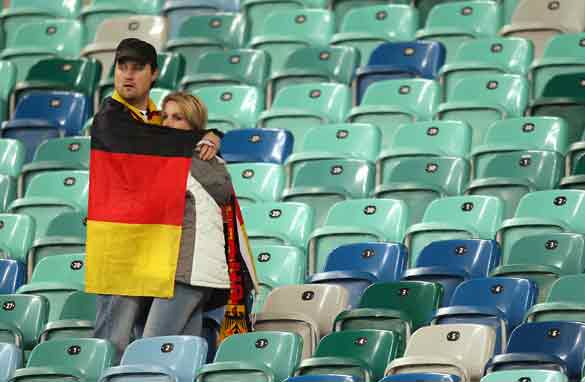 It certainly wasn’t the football. Though the 1-0 scoreline may not have suggested a rollercoaster of drama, for the soccer fan purist there was action-a-plenty, as an intriguing tactical subplot produced nail-biting moments in both halves.

Spain were imperious in patches, dominating possession as if the ball were a toy to be shown but not shared with jealous playmates.

Coach Vicente Del Bosque controversially dropped star striker Fernando Torres to the bench for the start, leaving the side from the Iberian peninsula to craft attacks through guile and creativity rather than rely on the pace and ingenuity of the misfiring man of Liverpool.

The game became a up-scale chess match — requiring a steely nerve and cool application of talent from both players and coaches.

Xavi and Andres Iniesta pulled strings through the midfield with magnificent intelligence — as they have so often with club side Barcelona — and as the game went on, their play wore down the supreme Bastian Schweinsteiger in the center of the park.

Spain also managed success where the likes of Fabio Capello and Diego Maradona had failed, namely to compress the play in such a manner that Germany could no longer rely on their swift counter-attacking to penetrate the opposition defense, a fact already made harder through the speedy Thomas Muller’s suspension.

The game hung on a knife-edge for much of the 90 minutes, but you would not have known this from the atmosphere in the stadium. For two teams on the brink of the World Cup final, the platform for the biggest showdown in world soccer, the tone was set by a singing of the national anthems to fire up the players that was close to mute.

Co-ordinated chanting was almost non-existent once the game kicked off and even the ever-reliable, if slightly irritating vuvuzelas only really lifted the noise levels a couple of decibels during the game.

At halftime the queues for drinks and food were insignificant. Even a tout complained he had to sell his tickets for below face value. Where were numbers, where was the passion, the emotion and the expression of pride from those in attendance?

Theories abound as to why this was the case. The large space in the roof may have let the atmosphere dissipate too easily, the location may have proved too costly for the traveling of fans en masse or there were a high proportion of neutral fans from the locale making up the numbers.

Either way, it was a shame the experience of being present at what was billed to be one of the greatest games of the tournament struggled to raise the pulse in terms of spectator experience, let alone hairs on the back of the neck.

Well done Germany for a fantastic showing in South Africa, and congratulations to Spain for building on their superb record at international level, but please, will someone bottle some passion for use at the final in Soccer City?