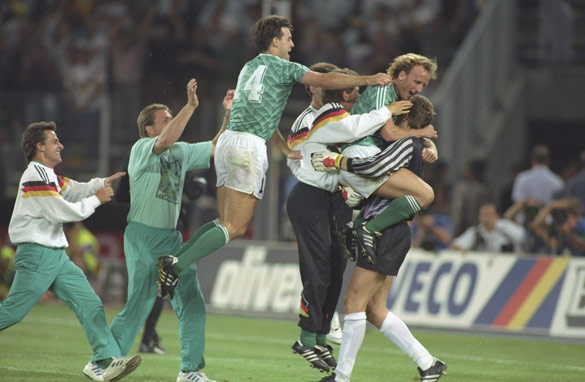 The West Germans took their revenge at the next World Cup in June 1970, when they came from 2-0 down in the quarterfinals to knock out England 3-2. The result so demoralized the folks back home that then British Prime Minister Harold Wilson blamed the defeat for his Labour Party losing the general election four days later.

Overall, England have won 12 of the 27 meetings between the countries, and Germany - or West Germany - have been victorious on 10 occasions, with five games drawn.

Two of those stalemates resulted in penalty shoot-outs, with Germany winning both - first at the 1990 World Cup semifinals in Italy, then in the last four again at the 1996 European Championship when England was the host nation.

It’s little wonder then that the current England World Cup squad have spent considerable time practicing penalties, while goalkeeper David James has studied statistics and video of his opponents’ most likely penalty-takers.

Historically, England may have had problems scoring from the penalty spot but they’ve had no trouble hitting the net from open play. Overall they have outscored the Germans 47-34 across all their games, including a crushing 5-1 World Cup qualifying victory in Munich in 2001 that prompted one UK tabloid newspaper to crow: “Don’t mention the score.”

Given all this history, it’s unsurprising that the build-up to Sunday's game in Bloemfontein has generated its share of trash talk. German legend Franz Beckenbauer has described England, the oldest squad in the tournament, as a kick-and-rush team that's been fatigued by the long Premier League season.

Then there’s Kevin Keegan – who quit as England boss following defeat by Germany in the last competitive match at the old Wembley Stadium - insisting that the young German side is "definitely beatable.” (Serbia showed Germany in the  current tournament that he's not wrong on that count.)

Whoever wins, Sunday will be but the latest instalment in one of football's most enduring international rivalries. The only certainty is that come what may, some fans will continue to mention the war.