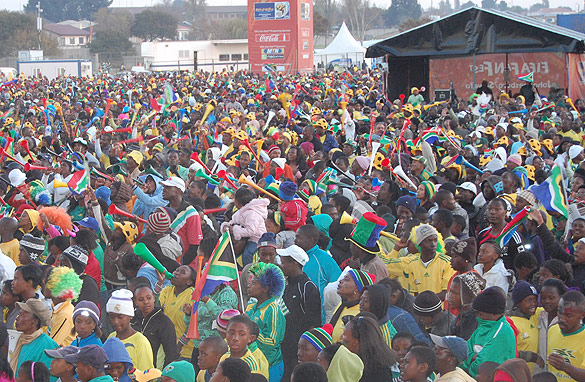 Actually two words: unbelievably loud. It was so loud you actually had to shout at the person standing next to you to make yourself heard.

Perhaps it was the live bands, or maybe the screaming fans. But I’ve been to football matches and been blasted by speakers at live concerts before. That was just a gentle background soundtrack compared with the deafening noise of tens of thousands of vuvuzelas being relentlessly blown by the excited crowd.

The scene was as colorful as it was loud. The fans were dancing and waving flags. They were wearing wigs and hats, their faces painted in the yellow and green of Bafana Bafana.

As kick off approached the tension reached fever pitch, the national anthem greeted by a huge roar as the crowds watched their heroes line up on the giant TV screen.

Every save was cheered as the South Africans soaked up Mexican pressure in the tense first half. The two teams were understandably nervous, and for a moment I could actually hear myself think. This was a welcome break: for most of the day Robyn Curnow, the correspondent, cameraman Chevan Rayson, the engineer Jason Heap and I simply couldn’t hear anything on the phone and we couldn’t hear CNN’s output in our ears. More often than not we had to use an elaborate system of hand signals to give poor Robyn her cue to talk.

But the excitement on the pitch was soon to follow in an exhilarating second half. The home team scored the opening goal of the tournament –- and what a goal it was. A spectacular strike which was no less than the fans and the competition deserved, such has been the excitement here.

The crowd went wild with celebration, running in different directions, jumping, screaming and blowing their vuvuzelas for all they were worth. Luckily we were in the crowd shooting some colour pictures and Chevan was well placed to record the moment.

Mexico eventually scored an equalizer but even that wasn’t enough to dampen spirits or put a lid on the noise.

As the match ended the crowds drifted away. Some stayed to enjoy the music but it’s winter here and watching football on a big screen in the cold and dark was not an option for most of the residents of Soweto.