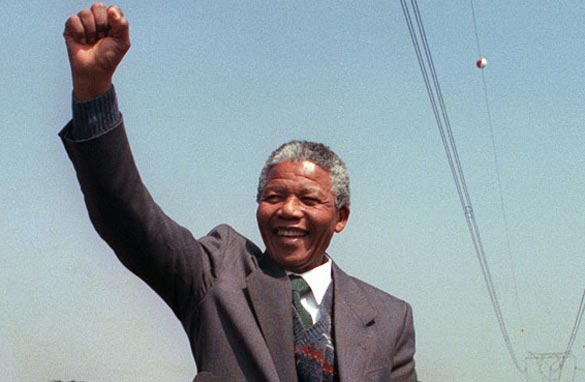 Sport provided a catalyst for this ambition when the embryonic state marked their re-entry into the international arena of competition, after so long in exile, by hosting the 1995 Rugby World Cup.

The tournament provided a theatre in which old identities were given new meaning. The host Springboks team – so long a potent symbol of white rule – captured the imagination of a nation as they triumphed against the odds to be crowned world champions.

An international audience watched history in the making as Mandela, the first black president of South Africa, celebrated in the “green and gold” colors of the team, a uniform that for so many years had been the bastion of the apartheid ruling elite. The image was iconic, the message was clear: unity and hope must conquer the prejudices of the past.

Fast forward to 2010 and South Africa is once again at a crossroads in its history. Selected by football’s world governing body FIFA to host one of the greatest showpieces in global sport, the 19th edition of the World Cup has been billed as an event to demonstrate the progress of the democracy and how Africa is ready to take its place on the global stage.

There is much reason for optimism, too. All 10 stadiums for the event were completed on track and to a high standard. The planet’s best teams have traveled to their base camps and have been pleased with the standard of the facilities.

FIFA chiefs say this World Cup will be the biggest in its history, with the potential to eclipse the cumulative audience of 26 billion that Germany 2006 attracted. They also predict the domestic economy will benefit greatly from the development in infrastructure the competition has necessitated.

Optimism aside, there is hope from some quarters that the carnival of soccer will in some way help to put the “Rainbow Nation” dream back on track after a lack of tangible progress over the last decade.

The UNDP Human Development Index figures rank South Africa a poor 129th out of 182 nations. The disparity between rich and poor is one of the largest in the world, and unemployment currently sits around 30 percent.

Life expectancy, in a country where 63 percent of all deaths in 2002 were attributed to HIV/AIDS (World Health Organization figures), sits at just 50 years old for men and has fallen in recent years.

It is amid this backdrop that South Africa hopes to show the world that, once again, Africa has a dream and that it is serious about fulfilling it. FIFA, too, wants to show that the World Cup can leave a legacy of lasting benefit.

Mandela plans to be there in the Soccer City Stadium on June 11 to see South Africa kick off the tournament in front of over 90,000 passionate fans. It is a long way from watching matches on Robben Island, but if his life journey has shown anything, it is surely that dreams can come true in this corner of Africa.

Do you think South Africa will be successful in hosting the World Cup?