The strikes that have seen around 70,000 workers down tools at the 2010 World Cup stadium construction sites in South Africa have made news around the world.

With Bhekani Ngcobo, the negotiator for the body that represents many of the disgruntled labor force – the National Union of Miners (NUM) – suggesting that unless pay is increased the unrest could enter the "Guinness Book of Records" as the longest strike ever, storm clouds are seemingly gathering. 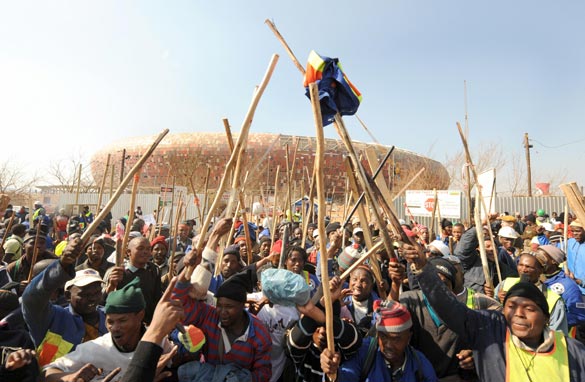 Workers strike in front of the unfinished Soccer City stadium in Soweto.

Of course, concerns regarding Africa's ability to host an international tournament of the size and scope of the World Cup have always been evident, ever since the "Rainbow Nation" were announced as hosts of the 19th edition back in 2004.

And the regular news of strife between workers and organizers plays well into an ongoing theme with many media outlets of trials and tribulations holding sway over triumph in the build-up to kick off. Do you agree? Add your comment below.

However, though the discontented workers could throw a major spanner in the building works, the recent news is in danger of overshadowing a growing optimism and confidence in a country that will invite the world's football fans to its shores come June 2010.

The recent Confederations Cup was deemed a success by Sepp Blatter, the president of world football's governing body FIFA, who gave the event a 7.5 out of 10 in terms of fulfilling the expectations laid down prior to the event. Blatter said in a press conference at the end of the tournament that his faith in awarding the finals to South Africa had been "more than justified."

It seems this feeling was reflected on the ground too. Editor of Sowetan Soccer magazine, Mo Allie, told CNN: "FIFA gave us a good mark because they were very happy with the turnout – and on average it worked out that 35,000 attended each game which was a better figure than when the event was held in Germany.

"Tickets were bought up by big sponsors and many of the matches finished late – but despite this people realized there was fantastic action at the ground if they went down to watch, and fans turned up.

"Football has always been a prominent sport in South Africa, especially with the big teams like Kaizer Chiefs and Orlando Pirates – but the great thing with the Confederations Cup was the mix of the crowds that attended, all ages and races, which is not something that is always found in other sports.

"The biggest change has been with the attitude towards the national team. Prior to the Confederations Cup there was widespread skepticism about how they would perform, but good performances against New Zealand, Spain and Brazil turned heads – they gave a good account of themselves and many people now believe Bafana Bafana have a fighting chance of getting past the group stages come the finals," Allie added.

"Transport and accommodation are still big logistical factors that need to be sorted. There is a park and ride system that did not work as well as it might, some drivers didn't know the way, buses weren't always on time. There were also many roadworks around the stadiums which led to a lot of delays, but in a way it was really good to have the Confederations Cup a year before the World Cup because it highlighted what shortcomings remain."

Such sentiments were echoed by the chief executive of the local organizing committee Danny Jordaan. Though it would be bizarre for a man in such a position to be anything other than optimistic, it is hard to argue that South Africa has successfully staged some major sporting events in recent months.

"In terms of scale and complexity, the World Cup is very different to the Confederations Cup and we are therefore already well advanced in planning for the extra demands. However, the success of the Confederations Cup is confirmation that we as a country can host major events. Look at the British Lions rugby tour and the Indian Premier League cricket tournament which we hosted successfully, and now also the FIFA Confederations Cup. It's a good boost for our country," Jordaan told a post-tournament press conference.

Undoubtedly, there are many challenges to be met before the World Cup party can start in earnest, but South Africa could yet prove many critics wrong.