The end of the football season is just around the corner and that means the transfer rumor mill will soon start to turn at a frenetic pace. Front and center of most of the market talk will be one of the most protracted on/off transfer-sagas going, namely Cristiano Ronaldo. Will he go to Real Madrid? Will he stay with Manchester United? Well, let me give my opinion on the matter. 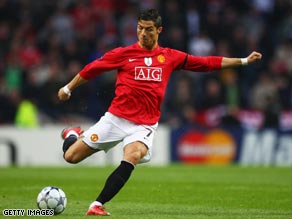 I really don't see Cristiano staying another season at Old Trafford. Manchester United is a fantastic club and the Premier League is probably the best in the world right now, but I feel that my compatriot needs a new challenge. He has won everything there is to win with the Red Devils, especially if this season ends with the retention of the European Cup and league title; he has also grown tired of criticism from English fans and the media, and he would also like to move closer to home.

I remember watching Ronaldo's first ever game for United. It was back in 2003, and he came on as a substitute at Old Trafford in the second half of a league game against Bolton. United were leading 1-0 but struggling to impose their superiority on a stubborn defense. And then, with 29 minutes to go, a skinny 18 year-old Ronaldo came on and with a display of verve, pace and audacity changed the game. The Red Devils went on to win the match easily 4-0.

A lot has changed since then and the last five seasons have featured many goals, titles and awards for the Portuguese winger. by the age of 24 he had won every team and individual accolade as well as establishing himself as the world's premier player. Last year was especially prolific with Manchester United winning the Champions League, Premier League and World Club Cup. Ronaldo then picked up the Golden Boot, Balon d'Or and FIFA World Player of the Year award to add the icing to an already substantial cake. He's done it all.

Ronaldo has fans all over the world, but there are many skeptics in England who still haven't forgotten his role in Wayne Rooney's sending off at the 2006 World Cup match. There is also a percentage of supporters who criticize the Portuguese international for his demeanor on the field, claiming he is arrogant and often dives in order to gain free-kicks and penalties. I know for a fact that Ronaldo doesn't let his detractors affect his performances on the field, but I also know that he has grown tired of people not appreciating what he has done for the Premier League and English football as a whole. There are only so many times that you can ignore criticism... it gets tiring after a while, and Ronaldo is only human.

Proximity to Portugal is another reason why Ronaldo would be tempted by a move to Spain. He has promised his family that he would eventually live closer to them, and the time may have come to fulfill this vow. Culturally, Madrid would be a better fit for the winger than the often cold and rainy Manchester. He has a great house and a great life and he loves the club, but the weather is nothing short of miserable and he misses some Latin flair in his everyday life.

So if you ask me if he's leaving, I say yes. My only concern if he becomes a Galactico would be about his ability to deal with all the glitz and glamor that comes as part of the package. At Manchester United he has operated under the paternal protection of Alex Ferguson. In Madrid, the stern Scot won't be around to tame him and those around him.